Just 0.08% of global CO2 emissions are caused by the countries most at risk of hunger crisis. Image: REUTERS/Kamal Kishore

Our planet’s hungriest countries contribute the least to global warming, according to a new report by Christian Aid on the impact of climate change on global food security.

The study, Hunger Strike: The climate and food vulnerability index, found that the 10 most food-insecure nations in the world generate just 0.08% of global carbon emissions.

As the planet warms, agriculture and food supplies are being disrupted, which is disproportionately impacting underdeveloped countries. 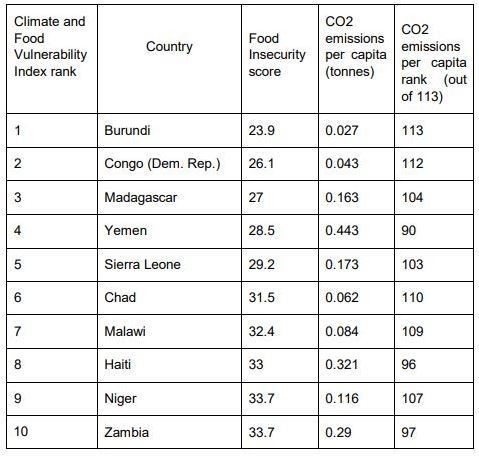 Burundi, which tops Christian Aid’s food-insecurity table, is highly dependent on small-scale agriculture, which employs around 90% of its workforce. Its farmers are vulnerable to the increasing number – and severity – of droughts, floods and other extreme weather events caused by climate change.

In a country where conflict and political unrest have been a constant presence, longer and hotter dry seasons represent an additional threat to food supplies. Its chronic malnutrition rates are the highest in the world, explain the report’s authors.

But the African nation’s economy has the smallest carbon footprint of any country, producing just 0.027 tonnes of CO2 per person – a figure so low, it’s often rounded down to zero, according Christian Aid. For context, the emissions generated by a single US citizen are equal to 581 people in Burundi.

It’s a similar story for other agriculture-dependent economies. The Democratic Republic of Congo is the world’s second-smallest carbon polluter and ranks just behind Burundi for food insecurity.

Having endured conflict, internal displacement and Ebola outbreaks, climate change poses an additional threat. Parts of the country are increasingly prone to floods, which often leads to soil erosion, landslides and crop failures. And due to higher temperatures and humidity, outbreaks of disease in livestock and crops are more common.

Off Africa’s east coast, the island nation of Madagascar, which ranks as the third most food-insecure nation, faces a constant risk of cyclones, flooding and droughts. The past few decades have seen wetter rainy seasons during cyclones, which by 2100 are forecast to increase in intensity by 50%.

Climate change is expected to produce increasingly intense rainy seasons, but hotter and dryer summer months, according to the Christian Aid report.

Climate change poses an urgent threat demanding decisive action. Communities around the world are already experiencing increased climate impacts, from droughts to floods to rising seas. The World Economic Forum’s Global Risks Report continues to rank these environmental threats at the top of the list.

To limit global temperature rise to well below 2°C and as close as possible to 1.5°C above pre-industrial levels, it is essential that businesses, policy-makers, and civil society advance comprehensive near- and long-term climate actions in line with the goals of the Paris Agreement on climate change.

Global warming can be beaten thanks to this simple plan

The World Economic Forum’s Climate Initiative supports the scaling and acceleration of global climate action through public and private-sector collaboration. The Initiative works across several workstreams to develop and implement inclusive and ambitious solutions.

This includes the Alliance of CEO Climate Leaders, a global network of business leaders from various industries developing cost-effective solutions to transitioning to a low-carbon, climate-resilient economy. CEOs use their position and influence with policy-makers and corporate partners to accelerate the transition and realize the economic benefits of delivering a safer climate.

Urgent action is needed to address food insecurity, and tackling the underlying challenge of climate change will be key.

A report by the Intergovernmental Panel on Climate Change found that to avert the worst impacts of the climate crisis the world needs to roughly halve global emissions by 2030, and reach net-zero by 2050 or earlier. Alongside policy changes, governments of all countries must make fundamental changes, such as promoting renewable energy, moving away from unsustainable agricultural practices and implementing rewilding programmes.

“In a just world our problems would be something we could address ourselves. But because we haven’t caused this climate breakdown, we alone cannot solve it,” said Philip Galgallo, Christian Aid’s country director for Burundi.

“We need richer, more polluting, countries to cut their emissions rapidly if we’re going to hold back the ravages of climate change and reverse their effects. Because of the global nature of climate change this is an opportunity for the world to act together in solidarity and fairness,” he added.