Habumugisha, the Goodrich TV boss is detained for assaulting a female employee.

Francis Habumugisha, the proprietor of Goodrich TV, is being detained by Rwanda Investigation Bureau (RIB) over physical assault on one of his female employees, identified as Diane Kamali.

At this moment Hon. minister we need two cases solved:

1- This lady’s case
2- Find, punish (according the law) and inform the public all people involved in mishandling her file

This case is being handled by the Prosecution and suspect is detained as investigations continue. A due process of law will follow and suspect will be presented to court with respect to criminal procedures.

Last week, in a tweet, Kamali said that Habumugisha physically abused her in July at a staff meeting that took place at the TV station’s office at Makuza Peace Plaza.

“I was beaten in public by a man called Dr. Francis (Goodrich TV) on 16.07.2019. It’s been two months since I informed @RIBRwanda [Rwanda Investigation Bureau] but he (Francis) hasn’t been punished yet,” she tweeted.

Kamali later posted a CCTV video footage showing a man who she says is Habumugisha slapping her after a seemingly heated debate. 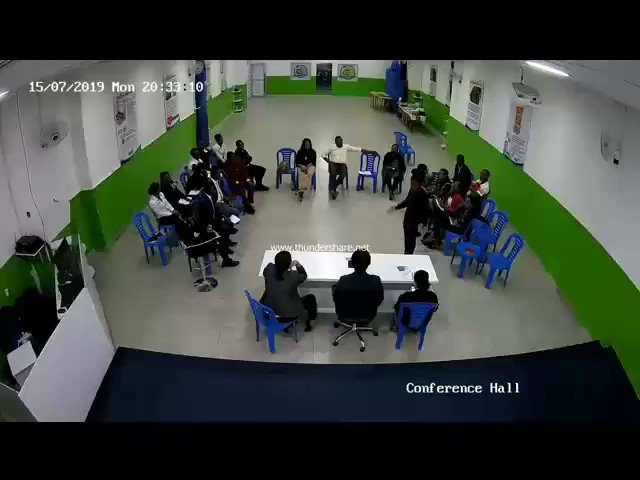 75 people are talking about this
Kamali told the media that what was seen in a CCTV video was true and the Goodrich TV boss slapped her after the latter realised she was filming a heated debate in which one of the fellow female employees was exposing the mistakes of her boss.

In her tweet, she wondered whether a rich and well-connected person can go around abusing people and never face justice.

Following this, Habumugisha was detained by RIB and his case was forwarded to the Prosecution Office for further investigation.

Jean-Bosco Mutangana, the Prosecutor General, said in a tweet on Wednesday, that the case was being handled by the Prosecution and the “suspect is detained as investigations continue”.

“A due process of law will follow and suspect will be presented to the court with respect to criminal procedures,” he added.

This also came as President Paul Kagame replied to Diane Kamali’s post promising her that he will follow up the case.

“We shall follow it up and get to know what exactly happened and take necessary action. Surprised if RIB was info(rmed), how they did not do what was required,” Kagame replied.

we shall follow it up and get to know what exactly happened and take necessary action. Surprised if RIB was http://info.how  they did not do what was required.

349 people are talking about this
Mutangana told The New Times that the suspect is being charged with intentional assault or battery, an offense provided and punished by article 121 of Law Number 61/2018 of 30th August 2018 Determining Offences and Penalties in General.

The constitution stipulates that everyone has the right to physical and mental integrity and that no one shall be subject to torture or physical abuse, or cruel, inhuman or degrading treatment.