What if you could grow a burger in the same way you grow grass?

Sounds implausible? Scientists at the University of Bath are taking cells from pigs and cows and growing them on blades of grass, joining a host of other researchers and companies who are working on meat production in the lab. The cells are harvested by biopsy and fed a solution of glucose, amino acids, vitamins and minerals, which helps them develop into mature muscle cells.

Cultured meat, as it’s known, is indistinguishable from tissue from cows or pigs under a microscope. The researchers say it could be on supermarket shelves within five years. 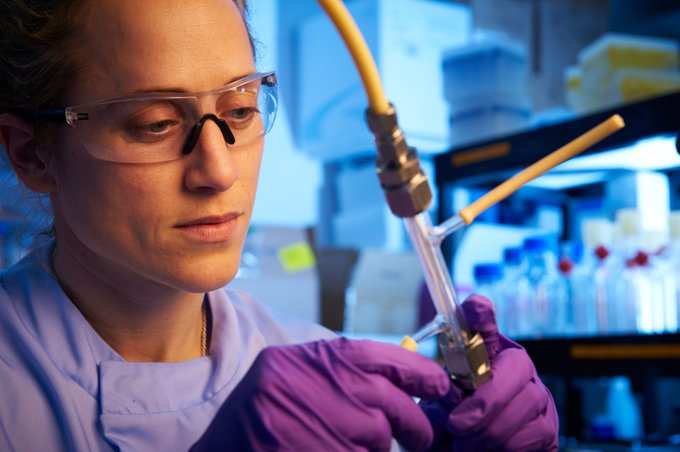 Alternative ways of making protein are rising in popularity as the earth’s population grows and people in developing countries start to consume more meat. A World Economic Forum White Paper on the future of protein said demand for meat will double in the 50 years to 2050 and called producing enough a “significant challenge.” As well as cultured meat, other alternatives include insect-based and algae-based substitutes.

“Alternative proteins represent a rapidly emerging new domain within the food system,” H Charles J Godfray, Oxford Martin School, Oxford University, wrote in the White Paper. “Alternative proteins that can act as substitutes for traditional animal‑based food are attracting considerable financial investment, research attention and interest in the media as a pathway to meeting the nutritional needs and food demands of a predicted mid‑century population of 10 billion, in a healthy and sustainable manner.”

The report highlights the positives of meat alternatives, including boosting food security and animal welfare, as well as reducing the risk of food poisoning and cutting down the environmental impact of producing protein. Even so, it – and other research – acknowledges there are technical, socio-political and regulatory challenges to overcome before widespread adoption.

Several companies are already working on alternatives to the traditional burger. Dutch food technology company, Mosa Meat, is aiming to bring lab-grown meat to market by 2021. It says it wants to help satisfy soaring demand with products that are healthier, better for the environment and kinder to animals.

Another company, Impossible Foods, will introduce a plant-based burger to US grocery stores later this year. The “meat”, already available in restaurants, comes from a plant molecule, which the company says has a fraction of the environmental impact of cow meat, using less land, less water and reducing greenhouse gas emissions by 87%.

One of the key barriers to cultured meat is price. Mosa Meat’s first burger cost $250,000 to produce and was funded by Sergey Brin, the co-founder of Google. Scaling up production and making it economically and commercially viable is a key focus of current work.

Dr Marianne Ellis, the senior lecturer who is leading the research at Bath University, says her team is working on reducing the costs and energy required, with the aim of making cultured meat the same price as traditional meats in supermarkets.

While cultured meat may be the closest alternative to farmed meat, other substitutes like peas, beans and jackfruit are healthier options, according to the World Economic Forum’s report.

Our relationship with meat and farming is complex and achieving widespread adoption will probably take time. The Forum report says some people may regard alternatives as “unnatural” and therefore unappealing. It also highlights a “distrust” in the modern commercial food system and the way in which food is processed. More novel products may be rejected on principle or because of a “yuck factor”, it says.

Still, it cites the rise of electric vehicles and the recent decline of the diesel combustion engine as an example of how quickly technologies and infrastructures can be disrupted.

Changing attitudes is a key plank of the work that needs to be done.

“For the foreseeable future, the meat and alternative‑protein industries will coexist and have the opportunity to complement one other,” the Forum White Paper said. “Only through dialogue and structured collaboration will society be able to transform the protein system, to create a future where safe, sustainable, affordable and healthy protein is provided to all.”